PC Nsikan Etuk has been a schools officer for eighteen years, and works in the pupil referral unit

A longstanding Southwark schools police officer has defended the use of stop and search as an important way of keeping children safe.

PC Nsikan Etuk, the school police officer at Southwark’s pupil referral unit, said he often sees young people carrying weapons in his work and was in favour of making searches less unpleasant, rather than cutting down on them.

He said: “I’m very aware of the levels of violence and vulnerability that our youngsters are presented with. Until we get to the stage where it’s a lot safer, until we can find a safer way of protecting young people, I’m not in the camp of reducing the numbers. I’m about improving quality and communication.”

The News reported earlier this year that Southwark had by far the highest number of stop-and-searches for children aged under fourteen over the previous year of any London borough, with 463. Just 56 of the 463 searches resulted in a ‘positive outcome’ – where police find something potentially criminal.

Southwark also had the second-highest number of stops of people between the ages of fifteen and nineteen, the next bracket up, with 2,976 searches in the same period.

PC Etuk said: “If you’re trying to improve the quality, then the numbers are more likely to come down anyway as a consequence. It’s about trying to ensure a higher success rate, making sure searches are intelligence-led.”

He ran a programme last year to get young people to explain to police officers how searches could be better carried out.

“They said it’s more about ‘talk to us, listen to us, listen to our views more. Explain to us what you’re doing, don’t just come over in our faces. It’s about engagement communication was the best one.

“They didn’t use this word, but they were talking about de-escalation. We could appreciate that’s what they meant. Strike up a conversation if possible. Try and be polite where you can. Say ‘I appreciate it can feel embarrassing’, and explain the reasons why we’re doing it.

“Another thing is a lot of the youngsters, they don’t get the chance to get closure. You can carry those ill feelings, especially if you’ve been handcuffed. OK the search is over, nothing’s been found. It doesn’t leave a good impression.

PC Etuk was speaking to the News after a ‘graduation’ ceremony for a police internship programme for young people he launched alongside educational consultant Doreen Sinclair-McCollins and ex-Met borough commander Victor Olisa.

The eighteen teenagers, at St Thomas the Apostle school on Hollydale Road, had thirteen weeks with black people working in law enforcement, and two weeks of work experience across the Met. The programme was open to all but many of the students who took part were black because of the demographics of the area.

The programme included sessions with firearms and forensics teams, the marine unit, the territorial support group, which deals with public order like protests, as well as several other teams. 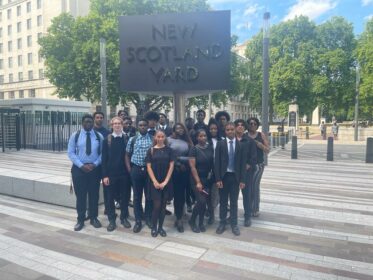 PC Etuk, who with eighteen years under his belt is the second-longest serving schools officer in the Met, said that the programme also had a huge effect on his fellow police officers who took part.

“That was a surprise direction we didn’t envisage,” he told the News. “We had officers in tears following the programme.

“What that suggested to me is… there was an emotional connection. When most officers sign up to join the police service, it is protect the vulnerable and so forth.”

He said that he thought “police officers are carrying a lot of trauma.” He added: “We’re going from situation to situation, with all the recent issues in society. There’s a low morale, burnout is the best description I could use. But this programme helped re-energise us.”

PC Etuk said he thought of the programme as an extension of his work in schools. “It’s about being a role model and building relationships with youngsters and getting youngsters connecting with police.

“If you’re working in a diverse borough like ours, you’re going to see us engaging with young people, working with quite a few of the most vulnerable individuals. I am seeing that gap being bridged but I am not under the illusion that it’s perfect.”

PC Etuk grew up in New Cross and Brockley, and spent a lot of time in Peckham with family. He joined the Met twenty years ago, three years after it was branded institutionally racist by the report on the police’s investigation into Stephen Lawrence’s murder.

“It was floating around, but I didn’t take an active acknowledgement of things like that,” he said. “I was doing my university degree stuff.. It wasn’t something that was fully in my mind.

“I was always fully aware of the relationship between myself and the police… But with regards to the Macpherson report I wasn’t aware of it acutely at the time. I was aware of racism [and the police], I had so much being fed back growing up as a youngster.”

One of the aims of PC Etuk’s pilot scheme was to bridge the gap between young people and the police that he himself experienced.

The programme could now be followed up with other schools if organisers get funding, also aimed to help get more non-white people interested in joining the police. Students will carry on getting coaching until April next year and will get an A-level equivalent if they complete the whole programme.

The young people who took part said they had learned more about the police and most said they were now interested in joining.

Brissi Bidi, 17, said: “I decided to join the programme for a few reasons, I had spare time but also I was interested in the manner that the police operate. I have found it enjoyable, eventful and inspiring and it’s changed my views on how it is to work in the police force, even making me seriously consider a role working in the firearms section in future.”

Esme Gustave, also 17, added: “I wanted to join because I believe it’s important to bridge the gap between the Met and the ethnic minority groups in society. It’s given us the chance to gain an understanding of the Met and its sections and I have thoroughly enjoyed it, including meeting different people and establishing connections to regain that trust in the police.”

Policing in schools was thrust into the spotlight earlier this year when a fifteen-year-old female student – known as Child Q for safeguarding reasons – was strip-searched after being wrongly suspected of carrying cannabis.

But asked if the incident, which resulted in days of protests in Hackney, had resulted in much fallout in his school, PC Etuk said “funnily enough, no.”

He added: “It was a big scandal. For me, the fallout has been more felt among community and officials in governance and individuals, looking at the concerns and trying to address those issues.

Peter Crouch steps away from director role at Dulwich Hamlet