What’s going on with the K-pop festival in Southwark Park?

Southwark Park, near where the event would take place

A K-pop festival planned for Southwark Park has not yet been given a licence by Southwark Council – despite the organisers appearing to suggest it will go ahead.

Southwark Council consulted on the proposal earlier this year and has yet to make an official announcement.

But the Southwark Park Association 1869 (SPA) were dismayed to find that an MIK Festival website and Twitter page had been set up over the weekend, strongly suggesting that the festival was going ahead.

An email from the council’s events team to SPA said this was not the case and that Proud Events were promoting the event “subject to licence” and “entirely at their own risk”. 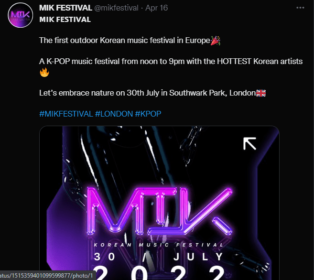 The festival would take place on the cricket pitch in the southern part of the park, bounded by the cafe and gallery to the north, and the athletics track to the south.

Building would start on the morning of July 20 and the dismantling process would finish in the evening of August 5 – meaning disruption to the usual functioning of the park over more than two weeks in total.

Organisers Proud Events have not responded to multiple requests for comment. The website for the festival does not currently have tickets on sale, but says more is to come soon.

Proud Events said they wanted to hold the event – which they said would be Europe’s first outdoor K-pop festival – in Southwark Park because of the area’s young, diverse population and good transport links. The company was originally given permission to hold the festival in 2021, before Covid rules scuppered these plans.

Discounted tickets to the festival could be available to local residents, and organisers promise Bermondsey and Rotherhithe residents “more than just music” at MIK.

“Also enjoying K-fashion, K- lifestyle, K-culture, street food and drinks, Random dance, flash mob. Or even your own dazzling moment on the stage,” they say.

The event does not appear to have much local support. Aside from Southwark Park Association 1869, other critics include the local Liberal Democrat councillors for north Bermondsey and the Southwark Park cricket club, whose members are concerned about damage to the pitch.

Exclusive: Disabled mum trapped in top floor flat in despair after being suspended from bid system