by Charles Harrison
in Crime
0 0
0

Ms Srncova, 32, a senior nursing assistant at Evelina London Children’s Hospital, was last seen alive at 7.45pm on Sunday, November 28, and was reported missing by a concerned hospital colleague on Friday, December 3.

At 11.40am on December 12, police reported that they had found a body believed to be that of Ms Srncova in Brunswick Park. The Czech foreign minister said police had confirmed it was the Camberwell nurse.

Ms Srncova is not thought to have been murdered. A “special post-mortem” conducted by police “found no evidence of third party involvement,” according to officers. 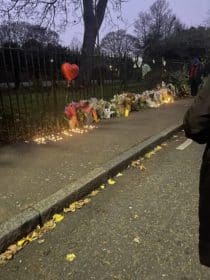 Courtney Jane, who helped to organise the vigil, said she would like to say to Petra: “You were truly loved by many in your local community.

“We will get the answers for you and your family.

“I hope her family knows we held a vigil for Petra. I wish they were able to attend to see how many people loved her.”

A priest from the nearby St Giles church also spoke at the vigil, saying in prayer: “All those who were close to her, all those who hold her in their hearts, be with her.

“Pray for all those who knew Petra, fill them with hope and life.

Police officers came to the vigil on Sunday. Flowers and messages of love still adorn the Camberwell park.

Petra Srncova: Flowers and messages of mourning left out for Camberwell nurse found in Brunswick park

MP for Camberwell and Peckham Harriet Harman, despite publicising the police search for Petra and placing a short note amongst the flowers, was not present for the vigil.

Police believe that when Ms Srncova left work on November 28, she withdrew money from a cash machine before getting on a bus towards Elephant and Castle.

They believe she then changed to a new bus going towards her home in Camberwell.

After announcing that the death was not being treated as suspicious, officers said that they will “continue to work with the Czech Government and local police to provide support to her loved ones.”

They have not yet confirmed a precise cause of death, however.

Last week, officers were patrolling the park while a detective went door to door asking questions. They said they were there to provide reassurance to local residents who lived around the area her body was found.