DJ Kev LockedIn – broadcasting live from Bermondsey, making you feel like you are down the boozer

LockedIn broadcasting from Bermondsey DJ Kevin Sage’s home is fast becoming a great way to stay connected locally and request some of those classic tunes you would have danced away to in the boozer just weeks ago.

The 45-year-old is a familiar face to pub-goers in Bermondsey, Rotherhithe and Elephant & Castle.

He is also known to a wider audience as the 2009 winner of ITV series The Biggest Loser having shed 9st 6lbs in just eight weeks.

No stranger to locking himself down for the life-changing TV show, a qualified broadcaster and lifelong pub DJ, Kev told the News that launching the radio station was a no brainer.

Available on a number of networks engaging a worldwide audience, the show for him was simply a way of bringing people together, including members of his own family.

The former Scott Lidgett schoolboy started playing at the Ancient Forrester’s in the Blue when he was just fourteen years old on a Sunday night.

“My mum would say to them ‘make sure he don’t stay up too late, he has got school in the morning’. She had got me into it after seeing an advert from a local DJ, who wanted someone to help carry his records around for him.

“My teachers would be in the pub dancing away to the tunes we were cracking out, but this was 33 years ago. I suppose I’d be taken into care in this day and age,” he laughed.

His love of DJ’ing became a life-long obsession and up until the lockdown was playing a regular slot at The Rising Sun on Harper Road, off the New Kent Road, as well as at private functions, in a number Slug n Lettuce’s and on river boats.

So when the COVID-19 pandemic hit, his work dried up.

Having moved his family back to Bermondsey to take care of his disabled mother Linda, Kev had stopped his broadcasting jobs but kept his equipment. So combining his DJ and broadcasting skills was no huge feat for him, when he found himself like almost everyone else across the globe confined to home 24-7.

“I studied broadcasting at college, done community and hospital radio, so knew the templates to use, with little to no cost. I could try and get a licence for FM etc, but that is time and money I don’t have. And I am not going to ask people for money to support the station. That is not what this is about,” he told the News. 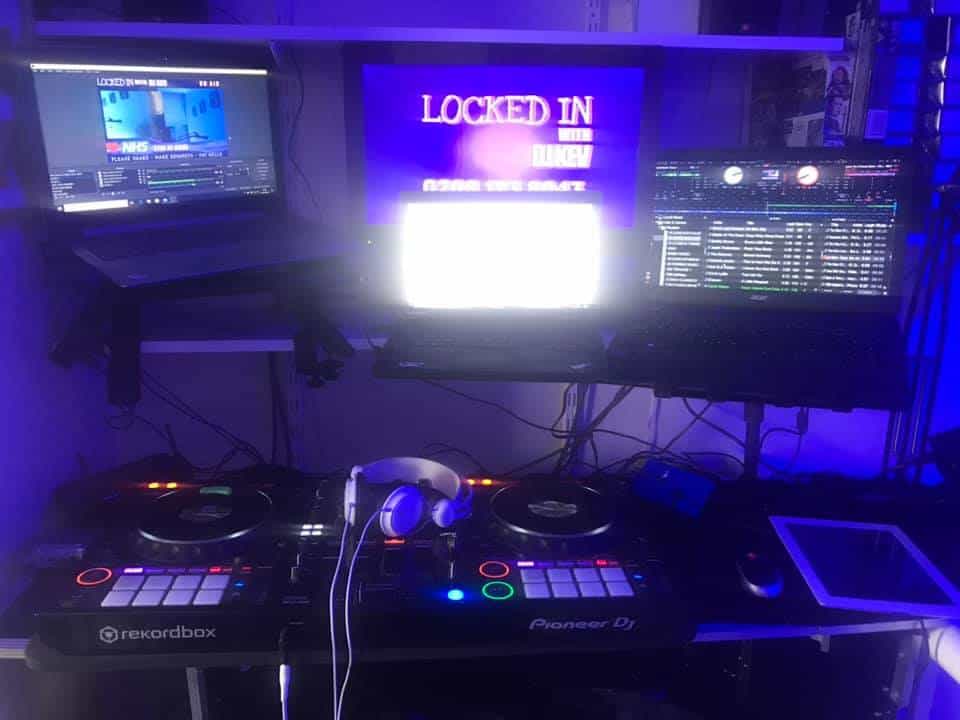 “I love to get more people tuning in and I know that some of the older people might not have access to the internet,” he said, “but more and more of them are getting on it and using Facebook so I’m trying to push that.

“At any one time we are getting 250-300 people jumping into the streaming, but is always about talking as if you are talking to one person.

“It is all about the music and being positive, but I do put out numbers like child-line and domestic violence. I know that 99 per cent of those listening might not need it, but if one person does, then that’s my job done.”

Before interviewing DJ Kev the News tuned into his St George’s Day broadcast with local people asking for requests and call outs, with some listeners from as far away as Leeds and even Germany, before one asked for ‘Who do you think you are kidding Mr Hitler’, the Dad’s Army theme tune.

The banter and humour of the Bermondsey people is ever present on the station and you are able to tune in at anytime to hear it, with DJ Kev taking requests between 7pm-9pm each evening live.

“When I was locked down for ITV’s The Biggest Loser it was an unreal situation. I would go to the gym, have breakfast, sleep and go back to the gym. You were locked away on that show, but you knew when end was coming.

“We are getting an understanding now of what it would be like to be on any of these reality shows, Big Brother and the like. But on a reality show psychiatrists were on hand.

“I remember them saying by week four you will get depressed and want to go home, by week seven you will feel really positive.

“Everyone will be effected differently, but I have put a jingle on my station with the Queen’s Speech saying ‘We’ll meet again’ and I have added ‘don’t forget who you are’.

“I hope we will all come out of this better. I know I will, maybe not financially, but as a person.”

The father of three says the show has been able to help him stay in touch with his eldest son, who is 22 years old and autistic, living with his first wife in Sydenham.

“He loves it and finds it a giggle,” Kev says, “and it’s difficult us being apart.”

His two other sons are in the house with him aged fourteen and five. “My youngest Harrison, you might hear him. He loves to jump in on the show,” he laughed.

And Harrison is now the only one jumping in on LockedIn, Kev has guest DJs playing from their homes.

“They can send me the mixes, they know what to ding, but might not know all about the broadcasting,” Kev explained, “so I have DJ Spiky, DJ Dave – that’s the same person he used to be called Spiky coz he had spiky hair, but now down at The Rising Sun he goes by DJ Dave, as he is as bald as a coot.

“That’s very Only Fools and Horse isn’t it.”

You can tune into LockedIn via on HERE