Southwark among London boroughs with highest rate of cycling

by Kit Heren
in Environment, Transport
0 0
0

More than one in ten people are cyclists in Southwark, new data shows.

Southwark has the second-highest rate of cycling out of all London boroughs, behind only Hackney, according to a survey by Healthy Streets, a group of organisations that aim to encourage active travel and clean air.

Some 11.6 per cent of people in Southwark cycled at least five times a week in 2021, with Hackney on twelve per cent. 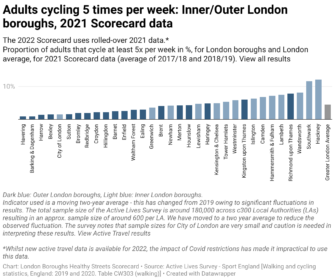 Southwark also had one of the largest drops in car ownership over the past year out of any London borough – which researchers put down to the increases in petrol prices, general difficulties with the cost of living, the ultra-low emission zone (ULEZ) growing – as well as policies to encourage active travel like low-traffic neighbourhoods and cycle lanes.

There are 2,145 fewer cars registered in Southwark with the driver and vehicle licensing agency (DVLA) than a year ago – a drop of nearly four per cent. That is behind only Newham.

The UK’s second most congested A Road is in Southwark

The area covered by low-traffic neighbourhoods (LTNs) has increased by nearly a quarter in Southwark over the past two years, behind only Hackney. These changes have been controversial in many places, with some residents arguing that they were not consulted properly, and that the new restrictions have made getting around more difficult. Others have welcomed the quieter streets and cleaner air.

Southwark Living Streets member and Walworth resident Jeremy Leach made the bold prediction that the “vast majority” of journeys will not involve cars in the future. He cited Southwark Council’s promise to reach net zero carbon emissions by 2030.

He said: “A strong set of election results along with the drive towards Net Zero from the Climate Emergency strategy should see Southwark moving rapidly towards the vast majority of journeys being walked, cycled and taken by public transport in the next few years.

Key for Southwark is reducing traffic and especially through traffic on neighbourhood streets, making walking and cycling safer including more protected cycle lanes on main roads and introducing controlled parking zones across the whole borough.”

The UK’s second most congested A Road is in Southwark

The UK's second most congested A Road is in Southwark