A Bermondsey woman has spoken out in horror after builders working on a controversial rooftop homes project drilled a hole in the wall of her flat near her daughter’s bedroom.

Zeynep Yenil lives in Roderick House on Raymouth Road in Bermondsey with her four young children, one of whom is a baby. ‘Regeneration’ specialists Apex Airspace are building 30 new ‘affordable’ flats on top of Roderick House and neighbouring Antony House, which has caused considerable problems for existing residents over the past year. 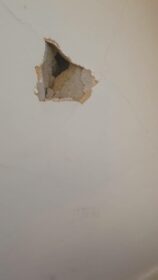 In the latest issue, Ms Yenil told the News of her dismay at seeing a hole drilled through her wall last Tuesday (February 8). More than a week on, the hole has not been fixed, leaving a draught to come through, she said.

“I can see through the hole outside of my flat now,” she said. “They said someone’s going to come out the next day, but I didn’t hear anything.”

This is not the first time Ms Yenil has had serious problems with the ‘regeneration’ project, which Apex Airspace initially said should cause residents “minimal” disturbance. We reported last September how water came pouring through her ceiling, causing a flood in her flat, as builders worked above. An Apex Airspace spokesperson apologised at the time for what they called “a minor ingress of water”.

Other residents have told of similar problems with flooding, drilling through walls and very loud building works early in the day.

Ms Yenil said of this latest incident: “It’s affecting my health and my kids’ health. I’ve had enough of living on a construction site.”

Apex Airspace did not respond to a request for comment on the latest incident.