by Herbie Russell
in News, In depth history, History
0 0
0

110 years ago, on August 4 1912, a team of boy scouts from Walworth perished off the coast of the Isle of Sheppey, Kent. It’s the story of camping trip turned tragedy which grabbed national headlines, upset Winston Churchill and, bizarrely, involves David Beckham.

In 1912, life was tough for the youth of Southwark. Most of the lads in this story lived around Brandon Street, Walworth, would have lived in slum conditions, worked full-time jobs from as young as thirteen, and have been well-versed in toil and drudgery of everyday life.

So when the 2nd Walworth Boys left from Waterloo Bridge, in a boat called the Areuthsa, setting sail for Sheppey, on Saturday, August 3 1912, they would have looked forward to two weeks of respite. Long nights under canvas, campfires and gazing up at the stars lay in wait for the 24 boys.

At 9pm they reached Erith, a town halfway down the Thames, where they pitched tents overnight before setting out at 4am the next morning. Despite their age, the boys were experienced boatmen, and it’s unlikely they’d have worried about navigating the final 26 nautical mile stretch.

But two miles off the coast, disaster struck. A stiff wind caught the sail and the The Areuthsa capsized, plunging the entire crew into the icy waters. The Leysdown lifeboat crew, themselves in rickety rowing boats, witnessed it and set off.

At the time, Chief Petty Coastguard Officer Streeter said: “The scene was pitiable in the extreme and one we shall never forget.”

They saved fifteen of the boys, who spent the next few days being cared for the coastguards’ wives. Among those were Edward Beckham, believed to the the great-grandfather of England and Manchester United legend David Beckham.

But tragically nine boys drowned in the violent storm, with one of their bodies only being found weeks later in Margate on August 15.

It was a story that immediately seized the nation’s attention. Heart-wrenching photos of the scouts carrying their friends in child-sized coffins draped in union jacks played on the country’s heart strings.

Prime Minister Winston Churchill, then First Lord of the Admiralty, was so shocked he ordered a naval destroyer – the HMS Fervent – to transport the bodies back to London. 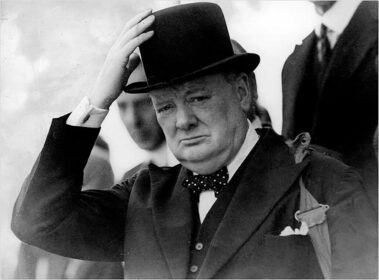 The coffins were taken to St John’s Church, Larcom Road, Walworth, where more than 100,000 people passed through to say goodbye.

On August 10, their funerals were held, with newspapers of the day saying that one million people lined the procession from St John’s to Nunhead Cemetery where the boys are buried. Reporters said how it was day of torrential rain and wind – a model of pathetic fallacy.

A bronze life-size scout was erected in Nunhead Cemetery in 1914, paid for by public donations and designed by Sir Giles Gilbert Scott, who also designed the iconic red telephone box. Sadly, it was stolen in 1969, so a new replacement memorial of Carrara marble was erected in 1992, which still stands today.

A tribute from the Sheppey Church Magazine read: “The pens of journalists have flowed fully and freely in giving the world the sad details of the Black Sunday which will never be forgotten by those who saw the capsizing of the cutter.

“We were looking forward to the visit of the Dulwich Mission Boy Scouts who created such a favourable impression by their cheerful obedience and spirit of good comradeship during their time in camp last year.

“They were such a happy lot, always doing with their might whatever came to hand; cricket or washing-up became equally a thing to be done with a fine enthusiasm.

“Fooling round doing nothing seemed to be quite an unknown way of killing time.

“Nine well-disciplined Christian lads were drowned in sight of their camping ground and we were not surprised to find that the heart of England was moved in sympathy.

“One cannot help thinking of the future usefulness of these boys if they had been spared. It would not have been fanciful to picture one of the lads as a Labour leader, another a foreman of works, another as zealous in church work; but God has ordained their lives on a different plan.

“In Paradise they will grow in the knowledge and in grace free from the temptations of the world.”

Back street abortions in Victorian Walworth

This site uses Akismet to reduce spam. Learn how your comment data is processed.