EXCLUSIVE: CPZ’s en route despite 69% against it

by Katherine Johnston
in Transport
0 0
0

“It has shaken my faith in democracy,” says an exasperated Lordship Lane business owner left reeling after the council refused to abandon its CPZ plans in the face of overwhelming opposition.

Michael Donovan, managing director of Roullier White, at 125 Lordship Lane, said he was shocked to hear that Southwark Council was now proposing to put a controlled parking zone into roughly half of the shopping thoroughfare.

The new plan is a U-turn given Cllr Richard Livingstone’s past commitment that any changes were unlikely to come into force without majority backing.

“We don’t want to this to be like Brexit, and be antagonising the people we live with who are in favour, but we do want people to know what is happening,” Mr Donovan told the News.

Councillor Livingstone, the cabinet member responsible for transport and the environment, said the amended plans for East Dulwich were based on a CPZ in Melbourne Grove, where 54 per cent of residents living near the train station were in favour, running from 8.30am to 6.30pm Monday to Saturday.

He said in West Peckham, only ‘a minority’ of respondents objected to a CPZ, with 58% in favour when asked for their view if a zone was also implemented in a neighbouring road.

“Further to this, any proposed CPZ still has to be advertised and is subject to the statutory objection process, which will again give people the opportunity to share their views about any of the proposals,” he said.

The council’s East Dulwich CPZ consultation received more than 2,000 resident responses – 37 per cent of all people eligible. Sixty-nine per cent were against, 25 per cent were in favour, and six per cent were undecided. When it came to businesses, an overwhelming majority was against the move – with 91 per cent against a CPZ. 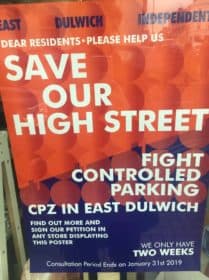 Mr Donovan claimed the understandable concerns of residents frustrated by commuters taking up road space by the station were being used as an excuse to steamroller the plans through.

He said traders would support a small CPZ to cover the area by the station, but were concerned a larger zone would lead to parking chaos elsewhere, and an inevitable roll-out across the borough.

In February, Southwark Council’s finance chief, Cllr Victoria Mills, told the News that consultations in Lordship Lane and West Peckham were only being held at the request of residents – and were not part of an internal agenda.

She also denied that the possible zones were being included in their budget – but couldn’t confirm this would stay the case.

As the News has reported, Southwark has lost £8.6 million of funding from central government for the next financial year, and is left with an overall shortfall of nearly £20 million it needs to fill to balance its books. Plans to close the gap include collecting nearly £5 million from ‘fees and charges’.

Now the borough has committed to go carbon neutral two decades earlier than planned after declaring a ‘climate emergency’, many are left wondering whether CPZs are becoming inevitable.

A petition against the CPZ set up by The East Dulwich Independent Business Association, with more than 100 members, gained 10,000 signatures in four weeks.

“Lordship Lane’s businesses are really flying in the face of the death of the high street but this will destroy our high street. It will crush us,” Mr Donovan said.

“We are all very proud of what has been achieved here. I have lived here 30 years and remember what it was like when one in three shops were boarded up.

“If democracy is the will of the people, this has completely shaken my faith in local government.”

Many traders pay around £24,000 in business rates each year, and need to take double that figure just to pay up – before factoring in staff costs and rent.

“A ten per cent loss in footfall, for example, would close businesses – I think we would fall like dominos,” he says.

And he doesn’t hold much truck with the argument shoppers will switch to public transport or walking.

Roughly half the petition signatories came from outside the immediate area, including Sydenham, Lewisham, Kent and further afield – often with poor direct transport links.

After a public meeting was held on Saturday, where residents shared their views on the latest proposals, traders are now waiting to hear whether the council will continue full steam ahead – or concede defeat.

Mr Donovan, and many others, will be holding their breath: “Richard Livingstone said they wouldn’t proceed with the CPZ if there was a groundswell against it.

“Well this is apparently the largest turnout the borough has ever seen. They’ve manipulated the figures – it’s absolutely shocking.

“Sixty-eight to 25 per cent is an enormous surge. But now they’re changing their tune because they didn’t get what they want.”