by Kit Heren
in Transport, Business
0 0
0

A fleet of cargo bikes will cycle from Bermondsey to Bankside today (Thursday June 24) playing birdsong to show the benefits of transport that does not give off pollution.

The event today, when delivery cyclists will go from Southwark Park to Tate Modern, is just the start of a whole month when cargo bikes will be playing goldfinch, blackbird, blue tit and songthrush on all daytime deliveries. Some of the cyclists will be wearing bird masks.

Tay Bonadie from EcoFleet, one of the riders taking part in the launch today, said: “Playing birdsong on the bike not only brings a smile but when there’s a few of us together at the lights it’s going to sound like the dawn chorus! It’s a bit of fun but also a great opportunity to get people thinking about what the future of our cities could sound like if they weren’t clogged up with vans and traffic!”

The initiative is being run by Team London Bridge, a business group for the London Bridge area, through its Bikes for Business scheme, which promotes cargo bikes as delivery vehicles. 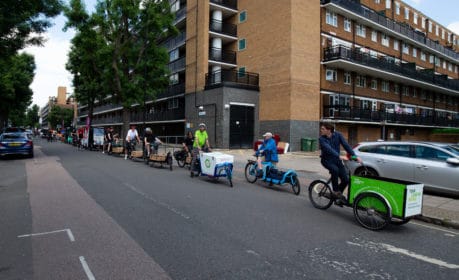 Jack Skillen from Team London Bridge said: “Cargo bikes are not only a fantastically cheap way to transport people and goods around the capital but have such a positive impact on the environment and the public. We wanted to find a way to highlight the amazing benefits these bikes can bring to the communities they serve. London can become a world leader in not only low carbon transport but also in rewilding our cities and bringing nature back into our public spaces.”

Edwin Malins, Nature Reserves Manager, London Wildlife Trust added: “Reductions in traffic and pollution will help wildlife to thrive alongside us in the city, particularly our favourite songbirds. Throughout lockdown we all found solace and joy in the sounds of nature and we know that birdsong is proven to help with our mood. If we can move to low carbon and low noise transport in our cities we could all enjoy the sounds of nature around us in our daily lives.” 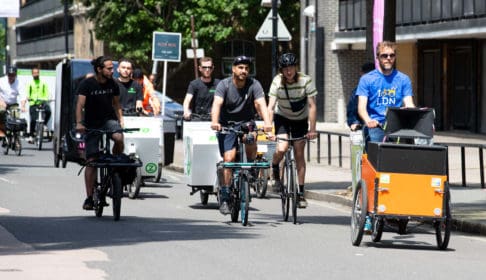 Will Norman, London’s Walking and Cycling Commissioner, said: “Cargo bikes are a greener, cleaner and often faster and more efficient alternative to polluting cars and vans. Bikes for Business is having a transformative effect in making deliveries more sustainable in south London. TfL funded the pilot of this scheme so it is fantastic to see our initial investment now being scaled up. The birdsong initiative further highlights how bikes benefit our environment.”

From Where I’m Standing

From Where I’m Standing