by Herbie Russell
in Transport, Community
0 0
0

Cabbies have been paying tribute to “Gorgeous George”, who revolutionised the London taxi industry, and did rides until he fell victim to a ‘collision’ with a moped while walking near his home on Kennington Lane last Thursday May 12.

Eighty-two-year-old George Vyse, who was born in New Cross and lived in Kennington most of his life, died yesterday (Sunday, May 15).

George was rushed to hospital but passed away around 6pm, surrounded by loved ones, after the decision was made to turn off his life support machine.

Today detectives renewed appeals for witnesses to the incident to come forward. They said anyone they are yet to speak to, or anyone with dashcam footage, that might have caught what happened last Thursday, at the junction of Kennington Lane and Kenington Road at around 8.50am, should call them on 020 8285 1574.

George worked at a Fleet Street printers and the Covent Garden Flower Market, before falling in love with the London taxi trade, which would occupy him for over 40 years.

In a notoriously insular industry, George was a dedicated union man, a member of the United Cabbies Group and London Cab Drivers Club (LCDC).

LCDC head Grant Davis told the News that every taxi driver that switches his radio on at the start of a shift need whisper thanks to George, who fought to have them allowed in London cabs in 1984.

The police, who were regulating the taxis in London at the time, tried to stop cabbies from having them, but Gorgeous George was having none of it. “He put a radio in his cab and demanded they change it and they did, but they only allowed one speaker, you need a radio. A bit of music or blast of the news between jobs is every cabbie’s right. He was like a hero in the cab trade.”

Known as a great talker, he also ensured sunroofs were allowed in taxis, lifesavers for generations of cabbies working on a hot day.

He was a constant thorn in the side of the Metropolitan Police, then overseers of the Public Carriage Office (PCO), tirelessly defending his colleagues’ rights and continued to do so when Transport for London took over in 2000.

“His badgering calls to the PCO’s top Senior Inspector, were said to induce panicked twitching not seen since Charles Dreyfus in Pink Panther,” said another cabbie Mitchell Ruff, mourning his friend’s passing.

He was always on-hand with advice for his clients, and did the same for other taxi drivers from an office he set up beside a well-known pit stop for London cabbies off Southwark Street.

Here, cab drivers would pay homage to “sage-like” George, “the master of finding five minutes for everyone”, who would broker cab deals and dispense advice on anything from legal troubles to garages.

Always immaculately turned out, and forever disappointed by the sight of a cabbie in a tracksuit, George was known for his beautiful taxis.

Grant Davis recounted the time he bought a brand new motor with one mile on the clock, only to have it stripped and painted metallic jaguar green.

His mahogany dashboards, leather interiors and crisscrossed Bentley-style upholstery were fitting for a man for whom, according to Grant, “his taxi was part of him”. 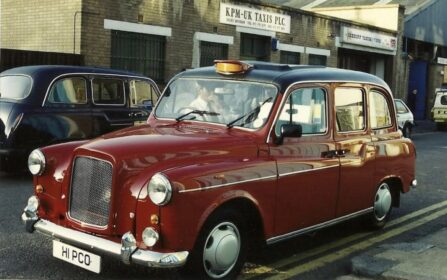 Mitchell Ruff even remembers seeing him parked under a bridge one rainy afternoon. Thinking he’d broken down, he pulled over to help, only to find George was sheltering his beloved taxi from the drizzle.

But the chatty, friendly father was a grafter too, never afraid to work 70 plus hour weeks to provide for his family.

In later years, he briefly moved to Bexleyheath with his wife, Anna, and daughter, Gina, only to find he missed the hustle and bustle of the city, and duly moved back to Kennington. 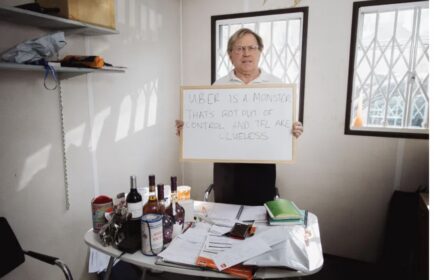 A wreath will be laid at the door of George’s Southwark office, with colleagues, friends and families invited to join in a minute’s silence.

A procession of taxis is also planned for George’s funeral, to lead the legend to his final resting place.

Mitchell Ruff said the much-loved George, who will be sorely missed by all those who knew him, will always be remembered for his sign off to nearly every conversation. He said it was a phrase that he was so well known for that Mitchell even got it printed for George to have on business cards that he’d give out from his little Southwark Street office. It was:

How much plastic do you bin? A Southwark group wants you to start counting

Tree planted for Bermondsey hero Jimi in his favourite park

Tree planted for Bermondsey hero Jimi in his favourite park