Dulwich Hamlet sit above the National League South relegation zone by just goal difference, after yet another defeat by a single-goal margin, this time away at league leaders Wealdstone.

Jeffrey Monakana’s penalty had sent the visitors ahead at the break, but two goals in as many second-half minutes swung the game, on a day which also saw bottom-placed Hungerford close their gap to Dulwich to six points, winning 2-0 away at promotion pushing Slough Town.

Dulwich centre-half Christian Smith, who like Monakana played for Wealdstone last season, started the game alongside captain Quade Taylor in midfield, and the two formed a shield in front of the defence which nullified the threat of the high-flying hosts in the first half.

Danny Mills spurned the game’s best early chance in the 24th minute, when, played in for a one-on-one by Monakana, he scuffed an attempt at goalkeeper Aston Oxborough at the near post.

Wealdstone then missed a similarly inviting opportunity, as Daniel Green bumbled his way into the box only to be thwarted by goalkeeper Charlie Grainger.

The game exploded into life on the half-hour mark. Returning winger Lionel Ainsworth cracked the woodwork from 20 yards out, before Mills’ attempt to pounce on the rebound saw him rugby-tackled to the turf by Oxborough. The stopper was subsequently sent the wrong way by Monakana from the spot.

Monakana clearly enjoyed his goal, in the midst of some friendly stick from his former supporters.

He tried his luck again shortly after from the left of the box, but could only curl a decent effort into the gloves of Oxborough. Wealdstone quickly broke, but Grainger was equal to Billy Clifford’s low drive from distance.

The Stones’ right-back Michee Efete also saw yellow for what looked a blatant dive on the edge of the Dulwich Hamlet box.

In the second half, Kieran Monlouis replaced a tired Smith in midfield, a change which altered the Hamlet’s defensive solidity. Shamir Mullings also entered in place of Mills, who was having problems with his ankle.

A sharp counter-attack could have led to a 2-0 advantage, but when Ainsworth centred to Taylor from the left, the skipper could only stroke a weak shot down the middle from just outside the area.

Alas, the 66th and 67th minutes were disastrous for Dulwich. First, Efete looped a fine header back across goal and into the net from Ashley Charles’ corner, then Green crossed from the same side to former Arsenal and Dulwich man Sanchez Watt, whose header was directed perfectly, this time low, into that opposite corner.

Delirium for the home fans in the 1,010-strong crowd, as Wealdstone moved five points clear at the summit, but disappointment for the 200 or so who had turned out in pink and blue.

The Hamlet threatened just once after the double blow, passing up a gift when Ainsworth, completely unmarked, failed to finish past Oxborough inside the area.

Despondency on the pitch for Dulwich, but more positively, the match at Grosvenor Vale was the destination for the latest Walk and Talk mental health and suicide awareness walk, as four representatives of the campaign trudged the seventeen miles separating Champion Hill and Wealdstone’s Ruislip home. 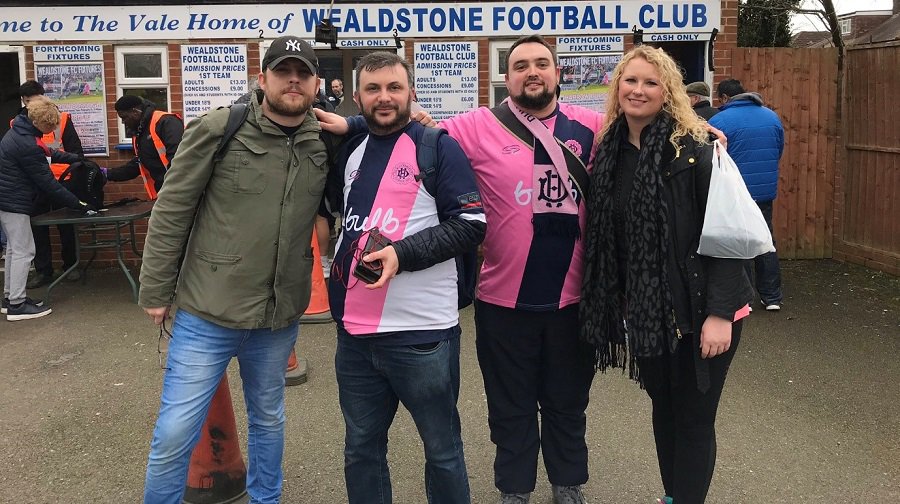