The Bermondsey Carnival, a community festival for the area whose history stretches back to 1900, is under threat after its funding was cut by Southwark Council this year.

The summer event in Southwark Park was given £35,000 by Southwark Council last year for a small edition, and has had about £80,000 for full-sized celebrations in the past. But organiser Russell Dryden of the Bermondsey Blue BID was told this year that there was no money for the carnival.

Asked for comment, Mr Dryden said: “To be honest, I’d rather not say, I don’t want to say negative things.

“The carnival is a wonderful community event, it’s the only real big community thing that happens for local people in this neck of the borough. It’s an essential thing for people.

He added: “Obviously budgets are cut, you’ve got to understand that money does get cut back. But it was run by the community for the community. It’s nothing short of a tragedy.” 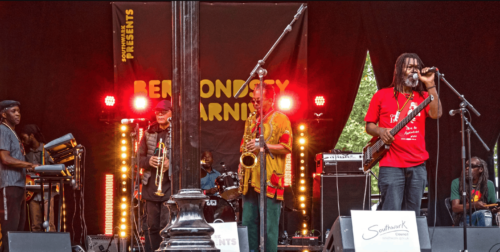 Mr Dryden said he was told by the council to apply for a culture grant. The council’s cultural celebrations fund offers grants of up to £10,000. It is unclear what kind of festival this would cover. The smaller version of the festival put on last year had a budget of £35,000.

Gary Glover, secretary of the Southwark Park Association 1869, a community group that represents the park, said the council’s decision was “a real shame”.

He said: “We don’t just see Southwark Park as just for Bermondsey and Rotherhithe – it’s the park for the north of the borough.”

The association has sent a letter to council leader Kieron Williams that reads: “For years the free to attend Carnival has bought people of all ages and backgrounds together for a day of enjoyment and relaxation, without interfering with people’s access to their park.”

The carnival has been especially important to the tens of thousands of people who live in the surrounding area, the letter adds, many of whom are not rich and do not have gardens.

“Without a dedicated budget from the Council the future of the Carnival is in doubt. Reinstatement of £35,000 would cost about 54p a head of the local population, or a tiny 0.4% of the Council’s overall Environment and Leisure budget of £88m. As we come out of the pandemic, giving some certainty around funding for the organisers of the much-loved Carnival makes financial and social sense.

“We call upon the Council to urgently reconsider its decision.”

Coming back together: Bermondsey Carnival returns, in spite of pandemic

The councillors for the local north Bermondsey area, who as Liberal Democrats are all in opposition to Labour, which controls the council, joined in the condemnation of the decision.

Hamish McCallum, who is the leader of the Liberal Democrats in Southwark and a north Bermondsey councillor, said: “The Bermondsey Carnival is now, more than ever, vital in its capacity of bringing the community together following a tough few years. It’s a shame to see its funding cut, especially as it’s an institutional event for Southwark that dates back to 1900.”

The Bermondsey Carnival has a history stretching back to 1900, during the second Boer War, when the Daily Telegraph launched a charitable fund to support the wives and orphans of soldiers killed in battle. The carnival was set up to raise money for this fund and soon became an annual event.

It continued through World Wars, the Great Depression, and different generations of Bermondsey residents coming and going – before petering out in the 1980s.

But, on a late summer’s evening at Southwark Park Road’s the Ancient Foresters pub in 1996, two local residents, Mick Wilmer and Mac Clague, reminisced about the good old days of the Carnival. And, after receiving support from local community group, local councillors and later Mr Dryden’s organisation Bermondsey Beat, the Carnival was back on the agenda.

It relaunched in 1997 and has been an annual event again ever since, until 2020 when it was cancelled because of Covid-19. Mr Dryden and Phil Burkett have been running the carnival for more than twenty years, and brought it back in August 2021 in a ‘bite-size’ edition.

The funding cut for the festival comes as the council runs consultation on a possible Korean pop music (K-pop) festival in the park in July this year, run by a private company.

Cllr Alice Macdonald, cabinet member for equalities, neighbourhoods and leisure, said: “We are working to support a wider range of community events, that reflect the diverse communities living across Southwark. However, government funding cuts and additional costs brought about by the pandemic, have put real pressure on our budgets.

“The income generated from commercial events, such as the K-Pop festival, play an essential role in enabling the continued support of community events through our new Cultural Celebrations Fund. We invite community organisations to apply for grants from this fund to run free, local events across the borough. Bermondsey Carnival is among this year’s applicants and we will be announcing successful bids later this month.”

The Southwark Park Association 1869 has launched a petition to get funding for the Bermondsey Carnival. You can sign it here.

Rotherhithe: Odessa Street residents gather in solidarity for people of the Ukrainian port of the same name

Rotherhithe: Odessa Street residents gather in solidarity for people of the Ukrainian port of the same name