2
VIEWS
Share on FacebookShare on Twitter
Elephant and Castle actor Aoife Hogan is looking forward to her latest short films screening in two Canadian horror festivals, as well as being selected by the UK’s Horror-on-Sea Southend festival.
Hogan, a member of the People’s Company at Southwark Playhouse, made the most of lockdown by appearing in two horror microshorts. One, “Killer Party”, was shot in South London and selected for Ontario’s AltFF Alternative Film Festival, and Ontario’s Couch Film Festival.
Shot in a day for a budget of a few hundred pounds, the microshort sees Aoife’s partygirl character lure her friend into a deserted location, under the pretext of going to a Halloween event. 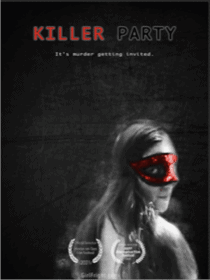 Aoife says: “We’re all looking forward to the restrictions being lifted, which will make it easier to act, go to the theatre and work together on set again. Lockdown has made all of us think about using all of our skills and talents, which actors have always done to survive, of course, and I think a lot of people in all walks of life have discovered talents they didn’t know they had a year ago.”
Asked about making the film, she says: “We shot “Killer Party” dressed in red latex Halloween outfits, as the characters are going to a fancy dress ball. One driver stopped to ask what we were doing, and asked if we could create a role for him in the film!”
What locations did you use? “Some we shot in Peckham in a deserted overgrown garden with a house that had been locked up and not lived in for years. It was a great atmospheric place to film as it was really mysterious.”
Was it an enjoyable film to make: “Playing my character was fun as you never quite figure out what she’s up to, or why she’s leading her friend off the beaten track, or where they’re going to!”
Aoife is currently appearing in another horror microshort, “Cute Kid”, also selected by Ontario’s Couch Film Festival and produced by Girlfright.com, and is working on her own short films on mental health issues.
Hopefully, there will be some local screenings to see our local star scare the living daylights out of us.
Tags: Aoife HoganKiller Party
Previous Post

The Art of Banksy

Show Me The Money

Show Me The Money