Feelings of nostalgia will inevitably arise for many audience members attending Cluedo, the entertaining murder mystery play, directed by Mark Bell. Those familiar board game characters now have a beating heart and are treading the boards in this theatre production that provides a surefire night of comedy entertainment, writes Carolyn Hart Taylor…

The dramatic set generates an air of mystery, an old mansion, specifically Boddy Mansion, where seven doors surround an ominous grand hall, providing the perfect setting for suspicion and intrigue to unfold.

Arriving at the mansion, the iconic characters: Miss Scarlett, Mrs White, Colonel Mustard, Professor Plum, Mrs Peacock, and Reverend Green, are greeted by the versatile Jean-Luke Worrell, playing Wadsworth. Asked what he does as Butler, he replies ‘I buttle’, giving audiences a taste of the irresistible silliness in store. 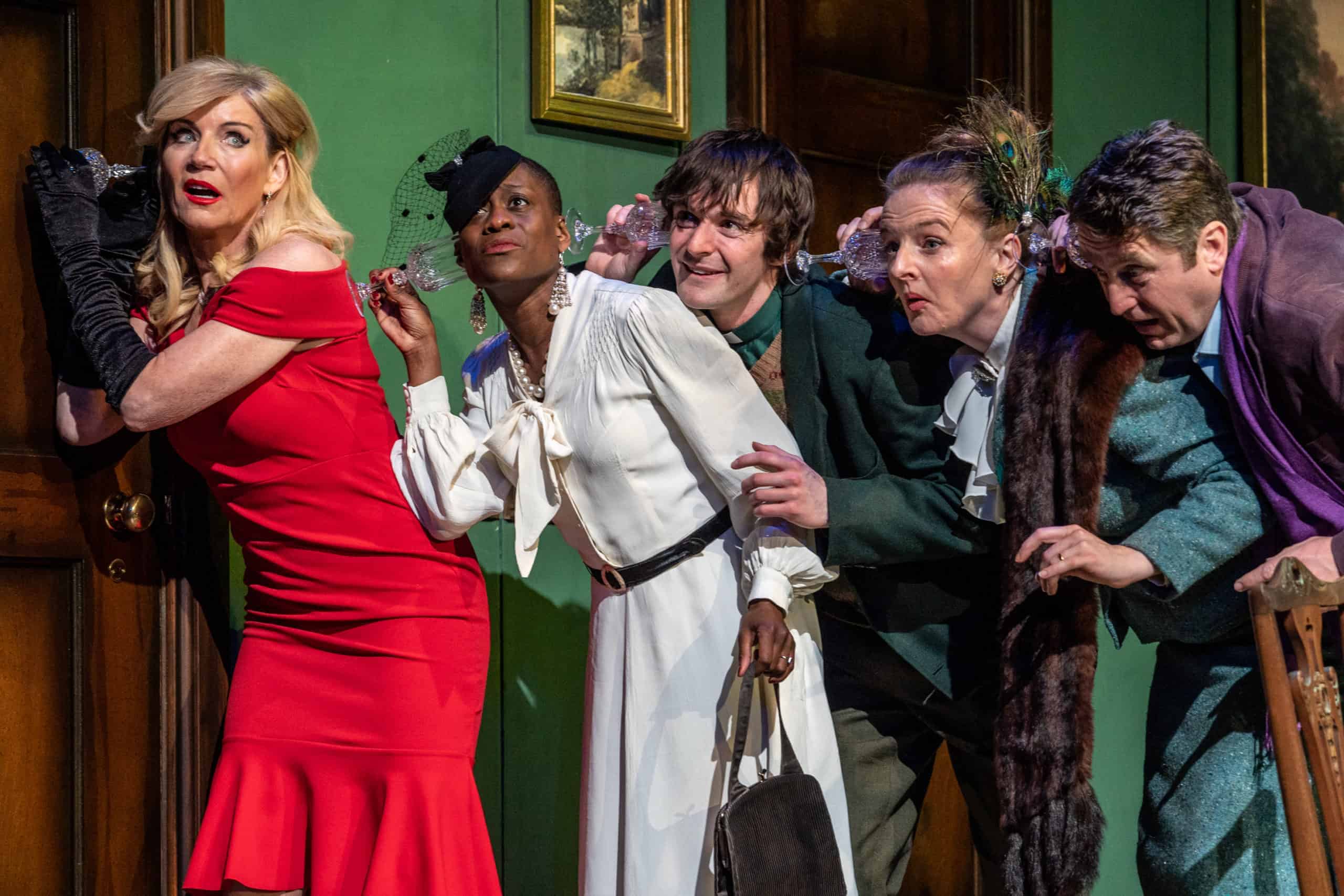 Worrell’s strong performance acts as the thread holding the eclectic Cluedo characters together, witnessed in his mesmerising recap of events. Alongside him, parlour maid Yvette(Laura Kirman), hilariously dips in and out of a French accent whilst glugging champagne, both proving themselves as integral central figures.

Act 11, was far stronger, with characters established, the cast settle into delivering this play based on elimination. A welcome development as the first half-hour dinner party scene rung a tad hollow, leaving actors looking unsure of their purpose.

Later, the pace quickens as they enter and exit doors, sleuthing their way to discover the guilty culprit, yet all having reason enough to murder! Mrs. Peacock(Judith Amsenga), does a grand job as the older woman, as does Michelle Collins as Miss Scarlett, adding a naughty edge to an otherwise aristocratic cast.

Special effects were on point, the set being a literal three-dimensional Cluedo game springing to life, doors unfurling to reveal portions of the study and library, etc.

Comedy moments ensue: Reverend Green gasps, sprawled on the ground with the dead cook atop him as guests continue chatting, and Colonel Mustard(Wesley Griffith), announcing: ‘Murder aside, it’d been a lovely time’.

A joyful night of comical escapism with guaranteed entertainment.

Man charged with rape of teenage girl in Peckham

Violent offender with links to Sydenham wanted on recall to prison

Violent offender with links to Sydenham wanted on recall to prison