Southwark Blue Plaques: who else deserves a nomination?

Southwark residents are being urged to nominate historical people, events and places of note in the borough to be given blue plaques before the annual deadline arrives at the end of this month.

Southwark Heritage Association (SHA), which runs the programme in the borough, has put up more than 50 blue plaques commemorating people with local connections and Southwark institutions that are particularly worth knowing about since 2002.

The News is another of the programme?s founders, alongside Southwark Council. The scheme first came as a way of getting round the strict criteria put in place by English Heritage – which runs the national programme – that a building must be standing and a person dead to qualify.

The next round is due to be decided later this year, but SHA relies on the people of Southwark to first say who or what they think should be honoured. After nominations have been vetted, a shortlist will be drawn up for people in the borough to vote on.

Here we run through some of the people who have already been given blue plaques. The borough has commemorated people as famous as Charles Dickens, Charlie Chaplin and Michael Caine. Below are two of the lesser-known examples.

Visit southwarkheritage.org/blueplaques to nominate a person, place or event for a blue plaque. 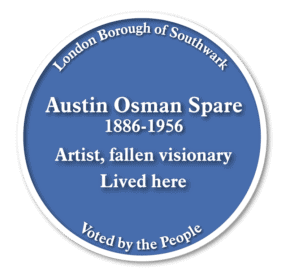 Austin Osman Spare was an artist, writer and occultist who had ?a lifelong connection with the borough of Southwark?, according to historian Benjamin Angwin.

Spare was a maverick who was associated with the symbolist and art nouveau movements of the late nineteenth and early twentieth centuries, but who also stood apart from them.

He was born north of the river but moved to Kennington as a child. He left school aged 13 to become an apprentice to a stained glass maker. He showed such talent as a young painter that he was recommended for a scholarship to the Royal College of Art. He became the youngest person to have an exhibition at the Royal Academy and also exhibited his work in the Newington Public on Walworth Road in 1904.

But Spare soon grew disillusioned with the teaching methods at the Royal College and dropped out. He began to focus on his own method, which relied on accessing the subconscious, producing strange and disturbing images. He also wrote and illustrated a book called the Book of Pleasure (Self-Love).

When war broke out Spare became an artist for the army. After the war, he had little mainstream success. He became homeless for a time during the blitz. He was rehoused but remained in poverty. He continued to exhibit his work, including in Southwark pubs. Spare also produced a series of pastel drawings of Southwark residents. He died in 1956 aged 69.

Spare Street off Walworth Road was named in his honour in 2016. 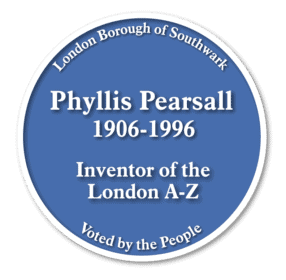 A budding portrait painter from a well-off family, in 1935 she couldn?t find her way to a party in Belgravia – so decided to make a completely new map of London.

She achieved this by getting up at 5am every day and walking every one of London?s 23,000 streets, a total distance of 3,000 miles. The result was the A-Z, which she claimed was the first indexed street map of London, although a competitor, Bartholomew?s Reference Atlas, had been available for nearly 30 years.

Pearsall printed off 10,000 copies of her map and tried to get them sold in several top London bookshops, including Foyles, Hatchards and Selfridges. She was finally successful with W.H. Smith, to which she reportedly delivered the order in a hand barrow.

She formed a company, the Geographers? A-Z Map Co., which went from strength to strength. She retired in her later years to West Sussex but remained involved with the company. She died of cancer in 1996 aged 89.

Her blue plaque was unveiled at her home in Court Lane Garden, Dulwich, on October 12, 2014.