by Katherine Johnston
in Education
0 0
0

St Thomas the Apostle Sixth Form says it is ‘delighted’ with this year’s A Level results after a ‘difficult year’ and ‘unprecedented circumstances’.

Half this year’s leavers are going onto Russell Group universities. Among them are the school’s highest ever number of students with Oxbridge places.

Victor Alayande will be heading further afield to Davidson College and Bomi Akarakiri is off to Howard University.

In a statement published this morning, the school’s leaders confirmed that 62 per cent of all students achieved at least one A Level Grade A*-A. Forty-eight per cent achieved AAB or above and the average grade achieved by an A-Level student is an A.

More than 90 per cent of all students in biology, computer science, economics, English literature, French, Italian, further maths, PE, and sociology achieved A* to B grades.

Headteacher Eamon Connolly said: ‘I am delighted for each and every one of our students for these excellent results; both those who have been with us since the age of 11 and those who joined our sixth form.

“I am proud of the achievements and feel confident we have prepared them, both academically and personally, to enter adulthood and embark on their chosen degrees as fine young people.” 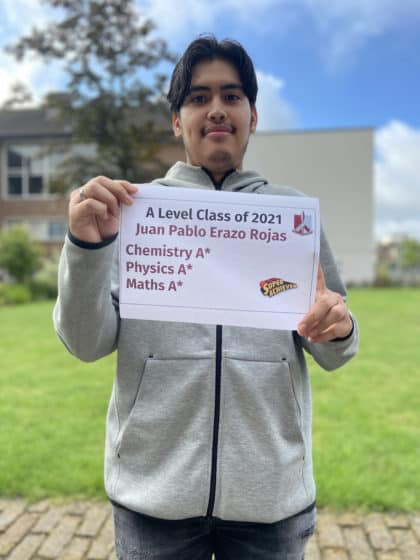