by Katherine Johnston
in Culture
0 0
0

Opening on July 30 this year and curated by Adem Holness, Dance Can’t Nice – which takes its name from a Frankie Paul & Sugar Minott song –  looks at key players in the British Bashment, Garage, Lovers Rock, Grime, Gospel, Jazz and Soul scenes, and the places were the genres flourished including south London bedrooms, barber shops, churches and living rooms.

The exhibition also looks at how policing has made it harder for venues to put on music events, including the role of the Met’s risk assessment form 696, and how this impacted on underground music culture during the 2000s.

Naeem Davis said: “I want to evoke a sense of nostalgia and create value for the forgotten.

“I want to honour our spaces. As the ownership of black music venues fades and we emerge from the global pandemic, our community and its origins have never been more important.

“Our culture thrives in the underground. Our music is a blessing and privilege to those outside our community who have been granted access.”

Adem Holness, music curator at the Horniman said: ‘I want this exhibition to really interrogate the relationship between black live music and public space.

“I’m hoping it prompts conversation and discussion about where black British music belongs.

“In some ways it’s about acknowledging the way in which black music has been pushed out of public space, but it’s also about honouring where it has managed to thrive.

“By working with Naeem to reimagine sacred black music and cultural spaces, I want to pull back the curtain on music genres we all love.”

The exhibition is free but booking is required. It runs until October 24, 2021 in the museum’s contemporary arts space The Studio.

It is one of many events from the museum’s 696 programme of live gigs, collaborations, specially commissioned works and residencies celebrating black British music. 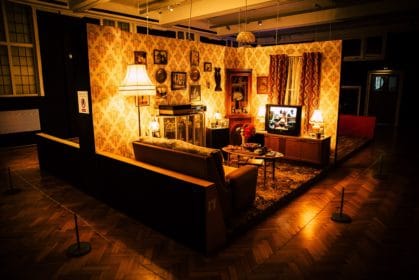